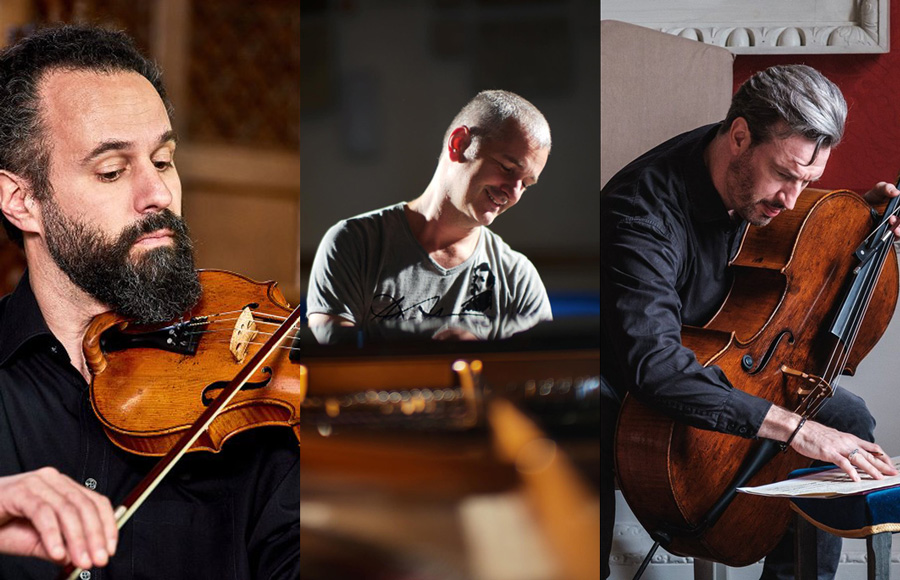 In Autumn 2020, in the midst of the Coronavirus, in a time when concert halls were closed and live music non-existent, three musicians, Joseph, Daniel and Jonathan, were each desperate to find people to play music with.

Joseph searched for musicians in his local area and was delighted to find Dan who then contacted Jonathan who also lives nearby, and the Tier3 Trio was born!

The January lockdown temporarily prevented us from rehearsing and performing until the Spring of 2021 when we began giving outdoor concerts to 30 people - the maximum allowed under the restrictions at that time.

Now we are delighted to be able to perform indoors to larger audiences.

Tier3 is looking forward to presenting the Paddock Wood Proms in October, a series of Chamber Music concerts in the heart of kent at St Andrew's Church, Paddock Wood.

For futher infromation about Tier3 Piano Trio see their website.

Joseph Wolfe is an inspired young conductor with remarkable insight. He has a wide repertoire ranging from the Baroque to the music of 21 century, all of which he conducts with great technical ability, sensitivity and passion. He has the ability to draw the most out of his players – inspiring them with his own fervour to produce totally gripping performances.

The concert was certainly not lacking in emotional heat. Colin Davis’s son, Joseph Wolfe, led the LSO in a really blazing performance of Berlioz’s Le Corsaire overture. The most intense moment came right at the end, when Wolfe made Elgar’s Sospiri burn with such tragic feeling we were all overcome.

Having completed his studies in London, Dresden and Berlin, Joseph Wolfe has distinguished himself as a conductor of great musical integrity and sensitivity, working with top orchestras around the world. Being a violinist has greatly informed Joseph’s approach to conducting and chamber music has also been a profound influence.

On the international stage, Wolfe has performed extensively with orchestras and opera companies in Europe and Asia. He has conducted ten performances of Jake Heggie's Dead Man Walking at Malmö Opera (several of which took place at the Royal Danish Opera in Copenhagen) and conducted concerts with ensembles including the Netherlands Radio Philharmonic Orchestra at the Concertgebouw in Amsterdam, the Bamberg Symphony, the Lutoslawski Philharmonic and Leopoldinum Chamber Orchestra, Wrocław, the Bavarian State Youth Orchestra and the RTÉ National Symphony Orchestra in Dublin.

The soloists with whom Joseph has worked have nothing but praise for his accompaniment, notable among these are; Nicola Benedetti, Sarah Chang, Tasmin Little, Chloë Hanslip, Asako Urushihara, John Lill, Andre Watts, Michal Kanka and Jack Liebeck.

The winner of the John Barbirolli Memorial Prize and the Royal Orchestral Society Award for “outstanding promise”, Jonathan appears regularly as concerto soloist and recitalist performing standard and lesser known works including Britten’s Cello Symphony and Shostakovich’s second concerto. He has given many premieres, including the European premiere of Xenakis’ “Hunem Iduey” for Yehudi Menuhin’s 80th birthday concert.

As a chamber player, Jonathan has performed at the Aldeburgh Festival, Wigmore Hall, Kings Place and Weill Recital Hall, Carnegie Hall. He was a founding member of the LPO Soloists and regularly performed in their Chamber Contrasts series at Wigmore Hall.

In great demand as a teacher and coach, Jonathan gives classes at the Royal Academy of Music, London College of Music and Kings College, London as well as coaching youth orchestras around the country.

“He has all the virtuoso velocity and firepower, and then some” – BBC Music Magazine

“Daniel Grimwood, fast making a name for himself as an original and discriminating musician” – Gramophone

With a repertoire ranging from Elizabethan Virginal music to the works of living composers, Daniel enjoys a solo and chamber career, which has taken him across the globe, performing on the most prestigious concert platforms, including the Wigmore Hall, Queen Elizabeth Hall and the Purcell Room in London, Saffron Hall, Bridgewater Hall in Manchester, Symphony Hall Birmingham, the Sage Gateshead, the Three Choirs Festival, the Rachmaninoff and Gnessin Halls in Moscow, the Carnegie Hall in New York, as well as venues in Germany, Austria, Italy, The Netherlands, Slovenia, Estonia, Taiwan, Azerbaijan, Egypt, Lebanon and Oman.

His musical interest started as a 3-year-old playing next door’s piano in Kent, and from the age of 7 he was performing in front of audiences. His training continued with Graham Fitch at the Purcell School, where he also studied violin, viola and composition, giving him a broad appreciation of classical music, and later with Vladimir Ovchinnikov and Peter Feuchtwanger.

As a solo recording artist his growing discography ranges from Scriabin on Somm Recordings to Algernon Ashton, a world premiere recording on Toccata Classics. His discs of Liszt and Chopin, performed on an 1851 Erard piano, received a unanimous chorus of praise from the press; the Liszt album was Daily Telegraph CD of the week and Editor’s Choice in Gramophone Magazine. He was the first artist to record on the Edition Peters Sounds label, the complete Fauré Nocturnes album was released to excellent reception in The Sunday Times, which was followed by a disc of solo piano works by Adolph von Henselt, described as “a blizzard of dazzling pianism” by the Observer. His most recent release is a disc of Doreen Carwithen and William Alwyn, also on Edition Peters Sounds, and his account of the complete Henselt Etudes will be released later this year.

Daniel regularly performs on live broadcasts on BBC Radio 3, and has been featured in BBC Four’s TV documentary series “Revolution and Romance”.

Away from the piano, Daniel is a keen runner and member of Paddock Wood Athletic Club.