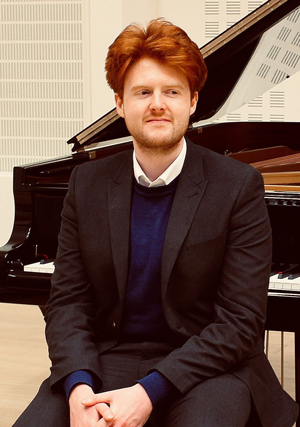 Described by Michael Tumelty in the Scottish Herald as ‘blindingly virtuosic’, Philip Sharp is a pianist and current Junior Fellow at the Royal Northern College of Music.

As a soloist, Philip has performed at venues including Wigmore Hall, St Martin-in-the-Fields, and St John's, Smith Square, at international festivals including the 'Festival Pianistico Bartolomeo Cristifori' in Italy, and has given several live broadcasts on BBC Radio 3.

In 2017, he was selected to be a Park Lane Group Artist, leading to several high-profile London recitals. A keen advocate of new music, Philip has given several world premieres of works by some of the rising stars of British contemporary music and has performed, and committed to memory, many seminal piano works of the past 30 years.

In April 2019, Philip performed George Benjamin's 'Shadowlines' at Wigmore Hall with the composer in attendance. As part of his solo work, Philip enjoys making virtuoso transcriptions of classical works. In 2018, his virtuoso trancription of 'Nessun Dorma' was featured by Classic FM and has since been taken up by other pianists across the world.

Philip also enjoys a busy career as accompanist and chamber musician. In July 2018, alongside acclaimed saxophonist, Emma McPhilemy, he was awarded a place on the Countess of Munster Recital Scheme and, consequently, gave recitals at many prestigious UK venues during the 2019 season. Recent highlights also include recitals with violinist, Callum Smart and a performance with Ian Bousfield, previously Principal Trombone of both the London Symphony and Vienna Philharmonic orchestras, as part of the RNCM Brass Festival.

In 2016, Philip graduated from both Manchester University and the RNCM with a First Class Honours degree on the prestigious ‘Joint Course’. From 2009 – 2016, Philip studied with Dr Murray McLachlan at Chetham’s School of music and the RNCM respectively. Following his undergraduate studies, he achieved a Masters with distinction from the college, studying under Prof. Frank Wibaut. During his time at the RNCM, Philip was generously supported by The Scottish International Education Trust, The Cross Trust, The Caird Trust and Dewar Arts Awards. For the 2016 – 17 academic year, he was the recipient of the Draper's Company Scholarship.