Discount offers are only available by post - see Tickets page for full details. 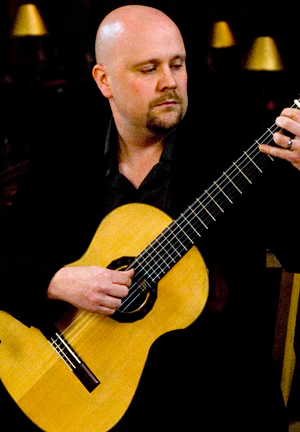 Scott Bradley was born in Carlisle in 1975 where he began studying the guitar at the age of seven with Pat Robinson. By the time he was a teenager his special aptitude for the instrument was already widely appreciated and he began to study privately and in master classes with outstanding international guitarists such as Neil Smith, Stepan Rak, John Duarte and Simon Dinnigan.

He graduated from Trinity College of Music in 1997 where he studied for four years under Gilbert Biberian and Nicola Hall, and took part in master classes with Ricardo Iznaola, Alirio Diaz, Vojslav Ivanovich and other world renowned players. Since Graduating Scott has studied with Nikita Koshkin, David Tanenbaum, Alan Neave and Craig Ogden. In addition he studied piano with Raymond Banning and Accordion with the late John Leslie.

Scott has played concertos, in operas, guitar ensembles and many other forms of chamber music including the world premier of solo and chamber works for guitar, and at venues nationwide including Regents hall and the Venezuelan Embassy in London. He regularly appears live as a soloist for BBC radio, as well as repeat invitations to perform at events such as the border Cathedrals Festival. He has also given a number of world premier performances including Chris Dumigans “Woodland Arabesque” which received great reviews and led to the composition of “Dance Rhapsody” for Scott.

As well as performing Scott has a busy teaching schedule with many students gaining their performance diplomas before heading to study at conservatoires. Scott has been an examiner for Trinity College London since 2010 and has examined throughout the world in places such as Argentina, South Africa, Thailand and India as well as throughout Europe and the UK. He has been involved on the panels that select the music for the guitar syllabus as well the accordion certificate syllabus. Almost two decades after being a finalist in the prestigious Keldwyth Young Musicians Award he was invited back as an adjudicator.