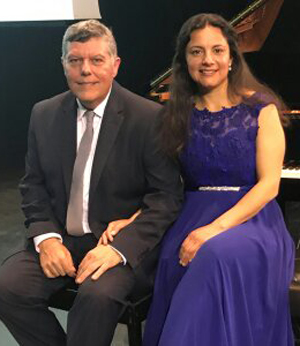 The duo’s repertoire is broad, tackling original works as well as transcriptions of compositions of all periods and styles.

Their first recording is the CD entitled “Música francesa para piano a cuatro manos” (French music for four hand piano), aiming to give more opportunities for people to hear and appreciate this chamber music.

The Dutch composer Bart Bakker dedicated his work “Trois pièces romantiques” to the duo, which has been staged recently in the Festival de Piano y Música de Cámara de Villajoyosa, of which the duo are founders and artistic directors.

Pamela and Pedro both teach at the Conservatorio Profesional “José Pérez Barceló” in Benidorm.

The programme “Music between two worlds” takes us on a journey with music from the end of the 19th to the beginning of the 20th century, where European and American composers use themes and typical popular rhythms of each country to compose their works.

We continue with Samuel Barber and his suite “Souvenirs” conjuring different European and American dances, such as the Viennese Waltz, the Ecossaise (a popular dance introduced by Beethoven and Schubert in the 18th century), the Pas de deux where he quotes a romantic slow dance from 19th century France, the Two-Step (a popular fast North American dance), Hesitation-Tango (a sensual Argentinian dance) and Galop - a reminder of the Hungarian dance introduced in Europe at the end of the 10th Century.

After the interval our journey continues with repertoire for orchestra transcribed for four hands piano. We begin with Rhapsody in Blue by George Gershwin in which the composer combines music from jazz and American folklore, using the piano as a solo instrument and combines it with moments of improvisation typical of jazz.

We finish with Nicolai Rimsky-Korsakov’s Capricho Español. This Russian composer takes us on his imagined tour through songs and typical dances from Spain such as Alborada (a festive Asturian dance which celebrates the sunrise), Escena e canto gitano (imitating the improvised rhythmic style of Andalusian flamenco) and Fandango Asturiano (a lively dance from Asturia which makes us think of the Jota of Aragon).